It is ironic that it is this post about following is the one that stalled me out.  But it did.  Thank you to everyone who wrote, called and hunted me down at a Grind In to tell me to keep writing.  You guys are the ones I need in my life. 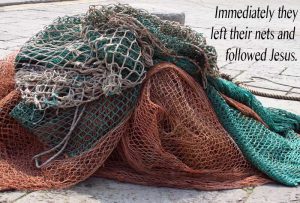 In Mark 1:16-20, Jesus calls Peter, Andrew, James and John to be His disciples.  Through them, there is an implicit call to us as well.  We are called to follow.

The call of Jesus for the disciples to be “Fishers of men,” has become a rallying cry for evangelism in the modern world.  I think it is more than that.  I think it is the further incarnation of Jesus.

Here is what I mean.

God who created humankind became a human.  He became incarnate.  He took on human flesh.  General, human flesh.  General human–a man–a person–a creation.  But when Jesus called the disciples and asked them to be “Fishers of men,” He was speaking the language they could hear.

Because they heard, they followed.

I listen to sermons, I listen to churches, I listen to Christians speak, and it is as if they are from another planet.  They talk about things like sin, salvation, atonement, predestination, incarnation.  They speak a language that is largely gibberish to anyone outside of their little church circle.  In fact, one little circle of Christians can talk about salvation using a particular set of vocabulary words used by another little circle of Christians and they mean very different things.

No one bothers to check to see if anyone is hearing what they are saying.

When God wanted to call disciples (hear the vocab?), He became one of them and spoke the language they understood.  Not just God to human, but God to human to a specific person whose life was about fishing.  He asked him to go fishing with Him, but they were going to fish for bigger fish.

And four guys understood they were being called for something greater.

That is part of my problem.  I need to hear God speak in words I understand again.  I need Him to call me from THIS life into something greater.  I need him to speak to THIS person and call me onward.